How RMB Saved a Tier 1 Aerospace Supplier 45% on Ducting

Every tier of the aerospace supply chain feels consistent pressure to reduce cost. Suppliers often look for alternative materials and processes to convert in order to achieve the new customer price targets.

For over 40 years, RMB Products has collaborated with several aerospace suppliers to convert composite and metallic ECS ducting, tanks, and drip pans into rotationally molded Nylon-12 parts. Many RMB proprietary resins are listed on major OEM-approved processor lists. By partnering with RMB, these suppliers see a reduction in cost and/or weight, and often increased material durability. 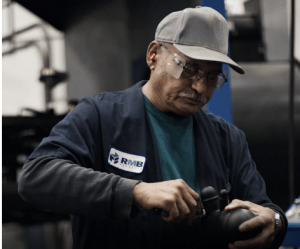 RMB’s engineers came back with solutions to convert the suggested ducts to rotationally-molded, fire-retardant Nylon-12 parts.

A minor update to engineering documentation was required to allow for the use of the new process and material. Because two ducts in the series had lengths over 40”, they needed slight design modifications to ensure that the durability of the parts would not be compromised during production.

To meet the customer’s requirements, RMB 437 was selected as the material for this application. This proprietary resin, which is formulated and produced by RMB, meets the 12- and 60-second flammability requirements of FAR 25.853. It is listed on several OEM material specifications, including those of Boeing, Lockheed Martin, and Sikorsky.

The proposal also included a post-molding assembly process. RMB would deliver the ducting to the customer already wrapped with insulation and fully bonded attachment sleeves, which assists during installation in the aircraft.

While presenting the solution to the Tier 1 supplier, the RMB sales team explained the upfront costs associated with a project like this. The tooling and engineering (the non-reoccurring portion of the proposal) can be costly. However, within a year, the Tier 1 supplier will start seeing a significant return on investment for each part.

The Tier 1 supplier presented RMB’s proposal to their OEM customer and received approval to proceed with tooling and first article parts. Additionally, a “cut-in effectivity” date was established for the OEM’s aircraft production schedule and a contract was created for RMB to produce several ducting shipsets each month going forward.

From purchase order to delivery, the entire process took 4 months. The parts were delivered ahead of schedule to ensure the Tier 1 met the cut-in effectivity date established at the beginning of the project. Below is the process of manufacturing the first article parts: 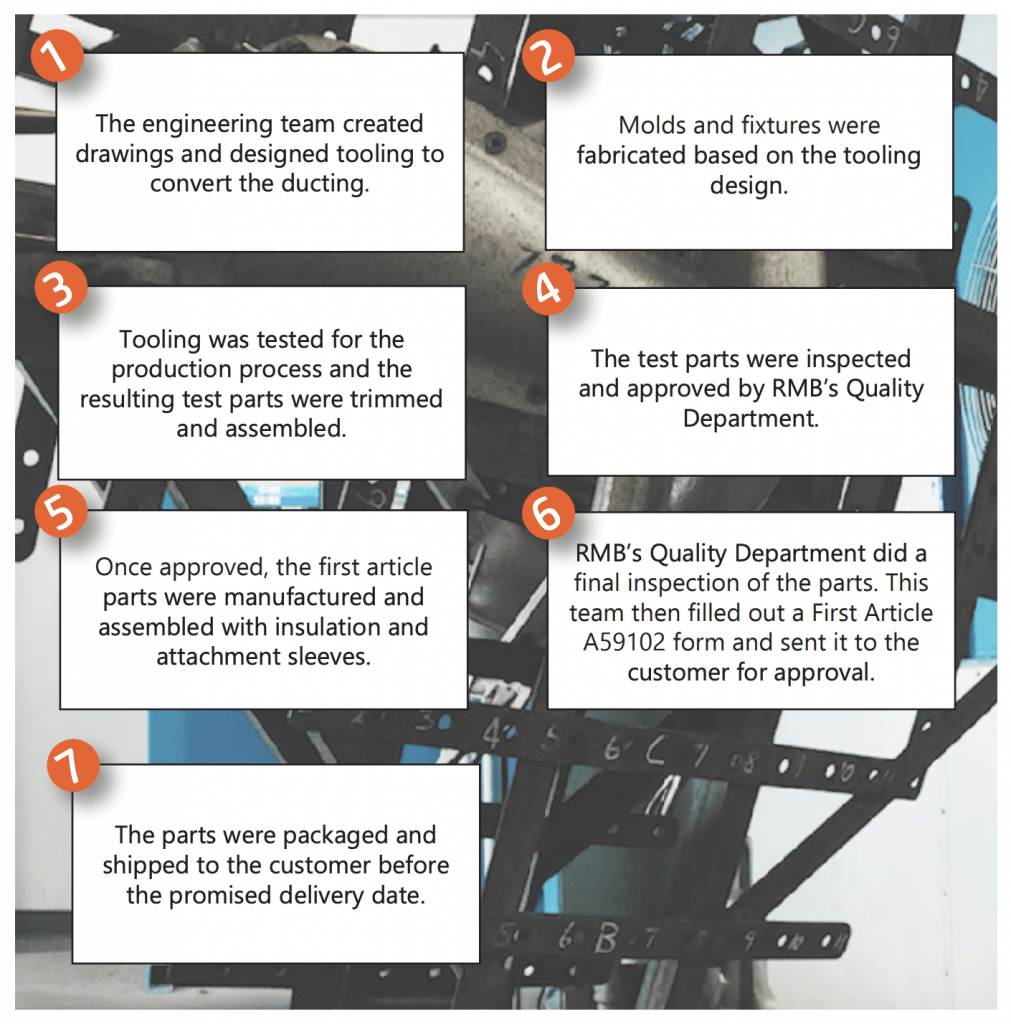 This conversion from composite and aluminum materials has resulted in an overall savings of 45% for this Tier 1 supplier. The new ducts mimic the exact geometries and functionality of the existing parts, including spuds, diameter variations, and lengths.

By working with an established rotational molding company like RMB, this Tier 1 supplier mitigated risk with proven solutions and functionality. The result was equivalent and improved quality parts for less money, with a return on investment for the tooling being realized in less than a year.

Going forward, RMB will be delivering production quantity shipsets every month with the part cost reduction being passed on to the aerospace OEM end-user.

Additionally, as part of a long-term agreement, the inventory for this series of ducts will be managed by RMB using a min/max system in conjunction with the Tier 1’s supplier portal. 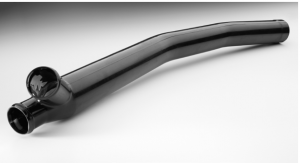 • Because RMB uses processes and resins that are part of multiple OEM qualified provider lists and material specification lists, the risk of converting this ducting was low for the Tier 1 supplier.

• Fabricating the ducts from nylon resin creates a more durable part with no minimum weight penalty.

• The incorporation of assembly operations into RMB’s process allows the Tier 1 to receive a line-ready unit for quick installation.

• Utilizing an RMB customer-managed inventory system eliminates the need for the Tier 1 supplier to issue a new purchase order every time parts are needed.