Since 2001, RMB Products has maintained a close partnership with a company that uses process vessels to tumble high-purity quartz and micro crystalline silica in an acidic solution. This tumbled quartz is eventually used to make glass crucibles for the semi-conductor industry.

During the tumbling process, four carbon steel vessels are running simultaneously for 18 hours at a time at a maximum service temperature of 210°F (98°C). This process, combined with the acidic solution, causes an extreme amount of abrasion and corrosion to the interior of the vessel.

Before 2001, the company was using 0.09” thick PTFE sheet lining inside the vessels to protect against corrosion. Typically, these liners were failing every 3-6 months, but in one instance, a liner failed after the very first 18-hour cycle. In every failure, corrosion to the liner was allowing the acidic solution to leak behind the liner, causing the adhesive to detach from the vessel wall.

While the liner was being replaced off-site, one of the two spare vessels was utilized. If another liner failed during that time, the company was at risk of losing production capacity.

Rotationally lining the vessels with ETFE has increased the service life to last 2–3 years on average.

In RMB’s rotational lining process, a vessel is rotated in an oven, allowing gravity to spread a layer of molten ETFE polymer on all internal surfaces. This creates a seamless lining that fully bonds to the metal substrate and is virtually free of any stresses. Since the liner is fully bonded with no adhesives or annular space between the liner and the metal substrate, chemicals cannot seep behind the ETFE liner, reducing the risk of corrosion. Therefore, the company is able to process more material at one time, improving operational efficiency.

Vessel After Lining & Before Painting

For this specific application, rotationally-lining ETFE in these vessels costs about 40% more than sheet-lining per vessel.

However, since the ETFE liners last 4 to 8 times longer than the sheet-lined PTFE on average, the roto-lined ETFE saves the company in the long run. With a longer lifetime, there is an increase in plant uptime and reduction in the shipping and labor costs associated with replacing the liners.

Since 2001, RMB has partnered with this company to roto-line many pieces of equipment. This includes vessels, as well as less corrosive equipment such as the bottom for a holding tank and wash columns. Rotationally lining this steel equipment prevents the various materials used in the process from causing corrosion and abrasion. 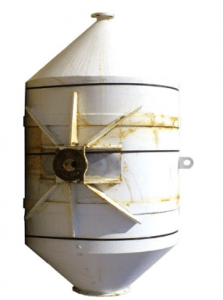 Vessel Prior to Re-Work

RMB has lined three different sizes of vessels for this company:

It takes 1-2 months to line each vessel using the following process regardless of size: